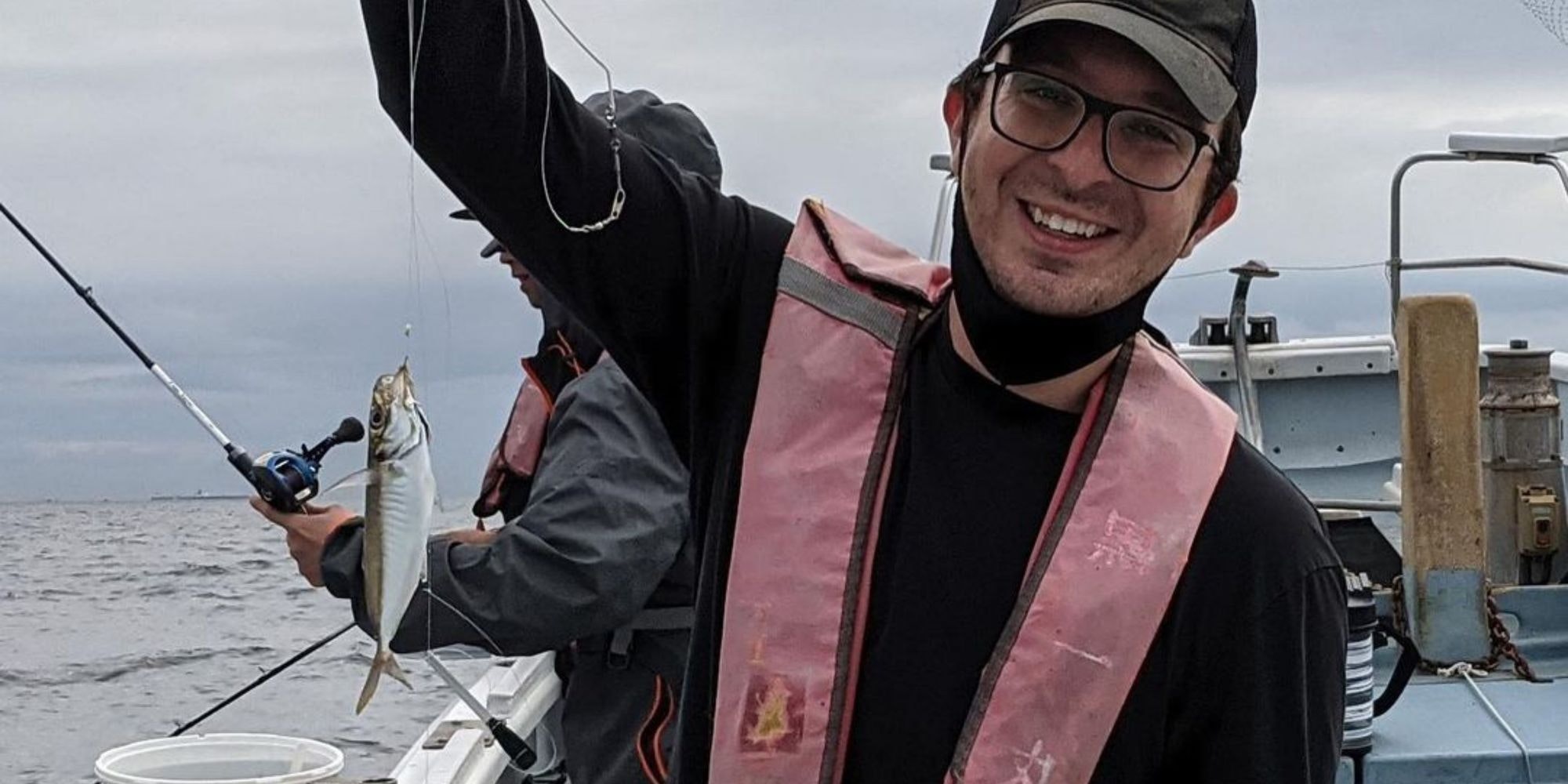 It began with me fantasizing about my life with Oscar.

That's what I was going to name my octopus when I brought him home.

I realized the absurdity of such a thought, but nevertheless allowed myself to imagine pulling a chair up next to the bathtub. It would be a Friday night, and I'd set my drink down on the small shelf below the mirror, next to the "Volume Up" shampoo - which I still purchase despite no longer having enough hair for the product to live up its namesake. My girlfriend, even though I was the only one who called her that, would have made other plans - as she often did. My other friends would surely be in their usual seats, at the usual bar. They would be happy to see me if I joined, but they wouldn't be sad if I didn't.

I would tell Oscar how I felt. About how I didn't want to go out anyway. About how I didn't care that I wasn't the only guy in her life. But he would know that such explanations weren't really for his benefit. He would simply extend one of his eight arms and place it on mine. Because he would understand.

I would be able to count on Oscar. I would buy him a tiny drum set, and one of those backpacks for cats with the little window in it. Except I would fill it with water and take him to Starbucks - the good Starbucks. All the baristas would know him, and their faces would light up as soon as they saw me with the backpack. They would draw a little cartoon octopus on the paper cup addressed to "Joe and Oscar." Life would be good. 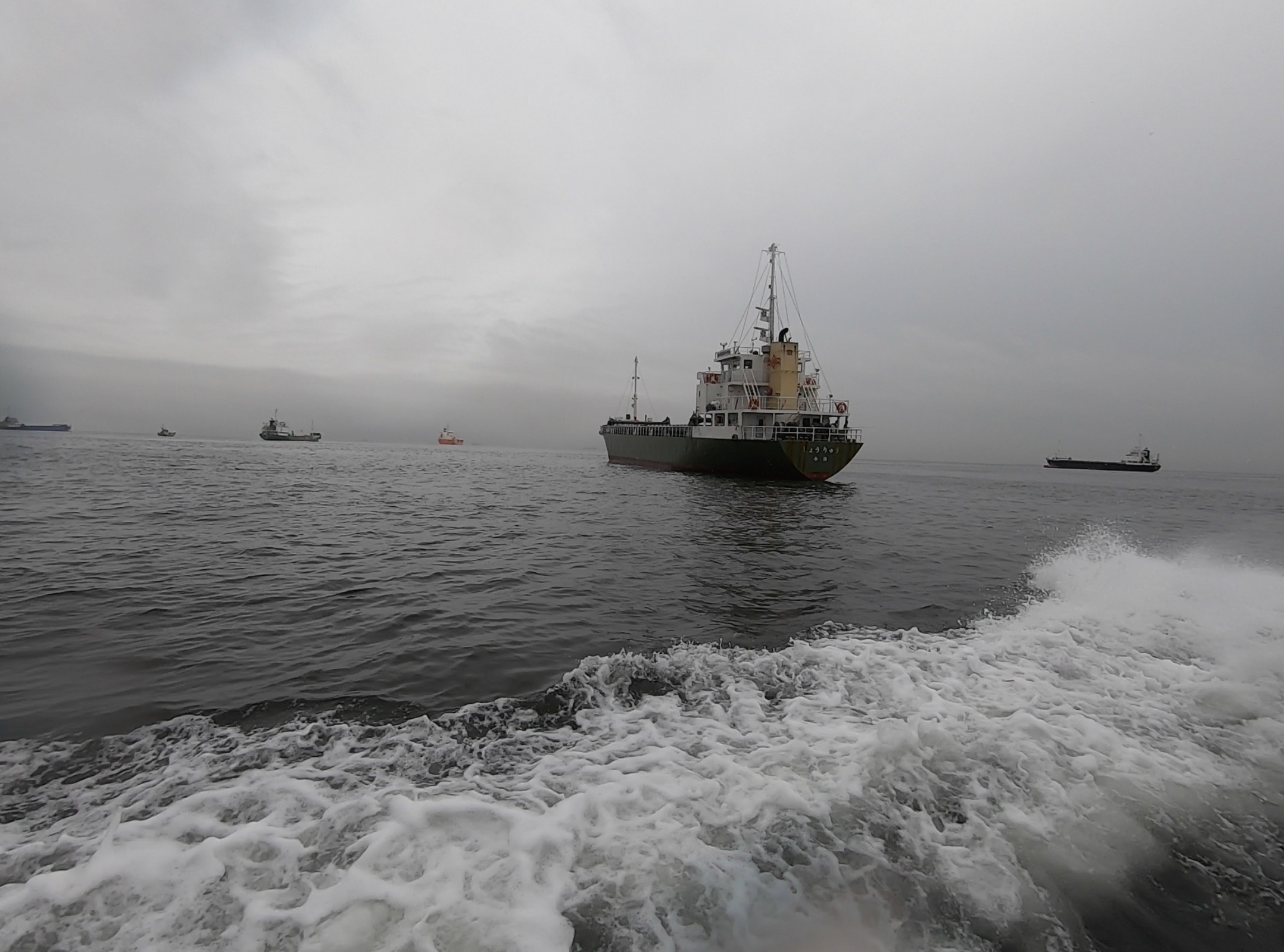 But of course octopus fishing is done with the intention of eating them shortly after they're caught. Not becoming their best friend.

And I've eaten them before. I even quite like takoyaki - "tako" being the Japanese word for octopus. But like most people, I've lived my life relatively far from the actual act of my food being sourced. Thusly, I agreed to go octopus fishing in hopes of building a kind of Joe Roganesque, pseudo-spiritual connection to the animal that must time and time again give its life for my takoyaki parties.

I've never been hunting, but I've always held a kind of weird admiration for my friends who did. They're just, I don't know - manlier? More grown up?

I mean that was literally what my friend said to me once, when I asked if he had checked himself thoroughly for ticks after leaving the woods. "Grow up, Joe."

I remember walking him through my mental process. Describing the memories I had of hand feeding a deer as a child. Memories of appreciating, though not quite fully understanding what it meant to have this beautiful, innocent creature put its trust in me - enough trust to take food from my hand. How could I ever shoot one?

"Easy. Shoot a bird first. Then work your way up. Start with a turkey. Real nasty bastards. Hard to feel as bad for them."

I hated how that made perfect sense to me. I'd been startled by an aggressive wild turkey once - when I was stationed in upstate New York, embarrassing me in front of the other junior enlisted boys. As a matter of fact, I would have loved to shoot that bird.

Could it be that simple? Did I really just need to slowly escalate my murders in the way someone might choose to lower themselves slowly into a cold swimming pool?

No. That felt too much like a serial killer's wikipedia biography. Like I was some psychopath going around strangling all the neighborhood cats until it was finally time to buy the van and ask for help pushing a couch into it. That couldn't be me.

I spent the night before the trip watching octopus videos on youtube.

I really do like them. I like how they solve little puzzles, and how they give themselves little suits of armor from sea shells. I like how they routinely escape from enclosures, making messes of laboratories, as if they were somehow performing deliberate acts of defiance against their captors. I even like how they sometimes choose to end their own lives when confronted with a life of imprisonment.

Some scientists think octopuses are smarter than golden retrievers. The medieval simplicity of the lures we were about deploy felt like an insult to that intelligence.

An inverted umbrella of thick metal hooks, seated below a cartoonish scarecrow of a fish. This was going to be the ruse that outsmarted the ocean's smartest invertebrate in his own home. This was a Japanese "Egi" lure. 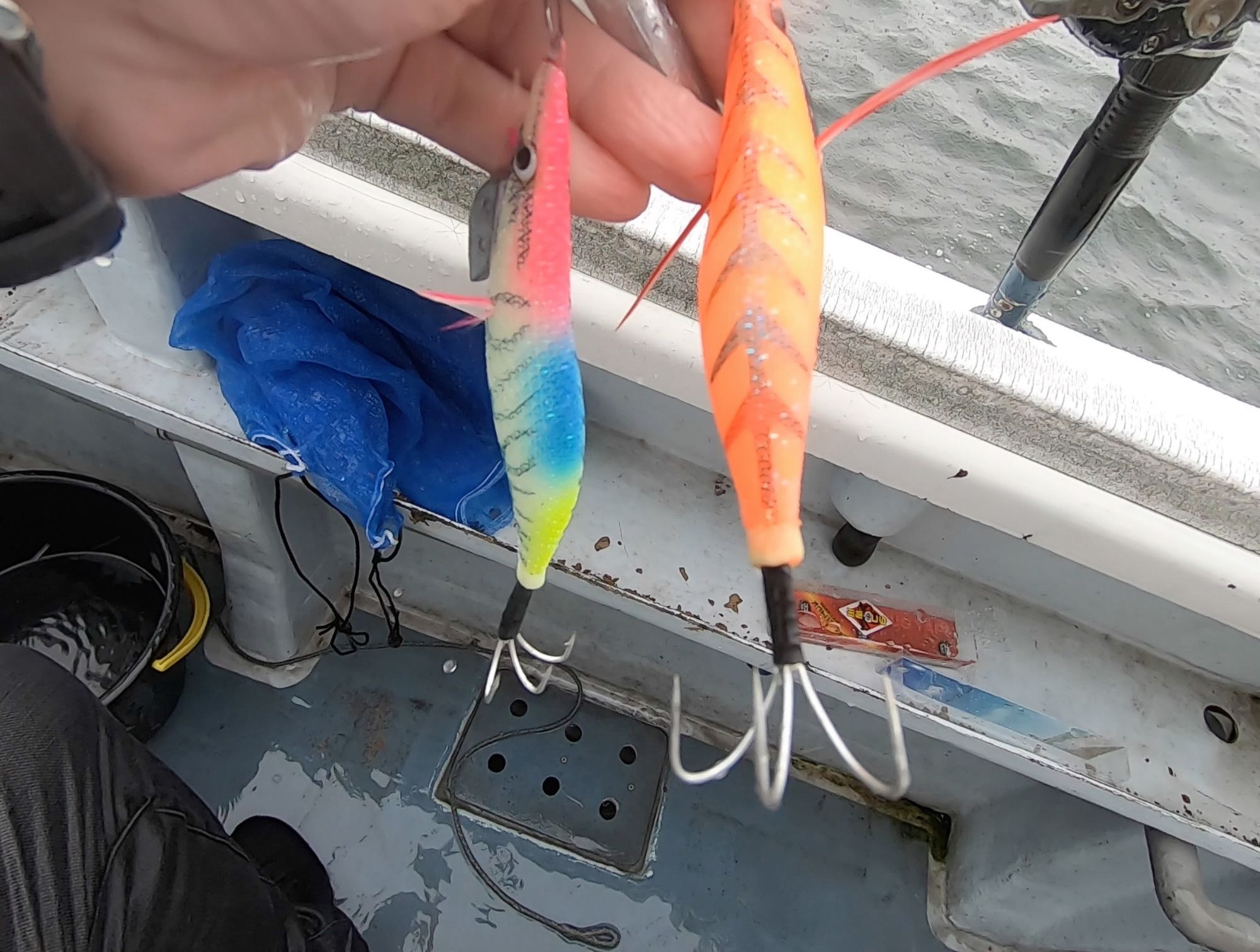 I could feel the bay floor in my hands, as the weight of my lure bounced gently on the bottom. Oscar was down there somewhere. Waiting to extend his trusting arm to me, like the deer so many years ago.

The thoughts of my betrayal were interrupted as the man sitting next to me on the boat stood up suddenly. He had one on the line.

When a hooked octopus reaches the surface, it sprays water.

Octopuses have a kind of natural jet propulsion, where they take in and shoot water from their mantles, allowing them to glide through the sea like little torpedos.

I watched the withering fountain as the man reeled the creature higher into the air. There was no more water to replenish the stream. It was not some final act of self-defense. It was like a man lifted by a giant, his legs still running in the air, not fully accepting that his feet were no longer on the ground. Still believing he could somehow get away.

In a matter of seconds - the experienced fisherman took the octopus, removed it from the hook, inverted its head, and pulled out the parts that were to be discarded. He cast them unceremoniously into the sea, and forced the writhing, mindless husk into a cooler. It was over as quickly as it began. 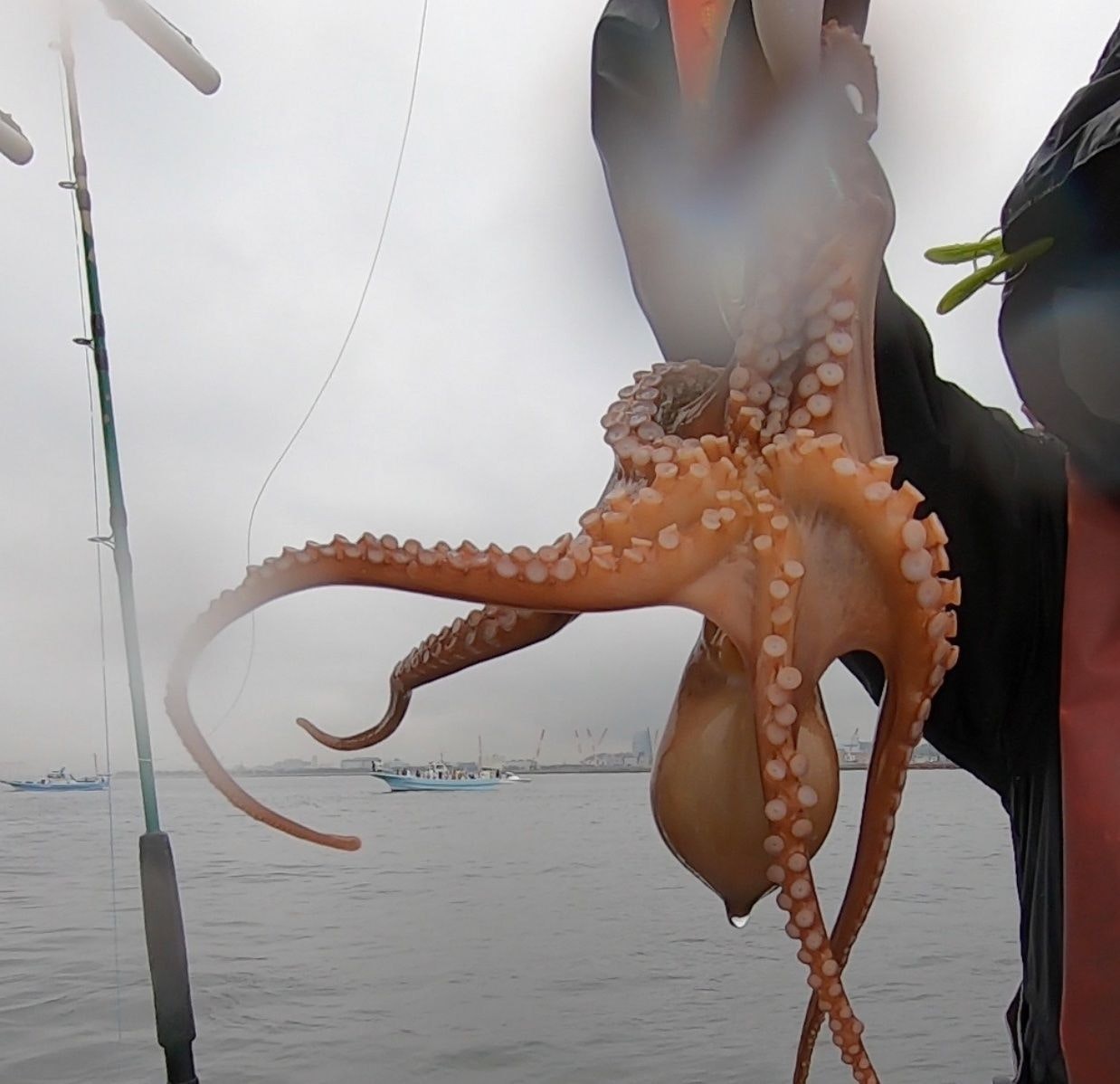 It was at that moment that I realized I had hooked an octopus of my own.

He was much smaller in size than his recently departed brother, and yet big enough to fit the description I had given Oscar in my mind.

I did not want to fight this animal to the death. I knew as soon as I grabbed it, the struggle would begin. I would be prying its suction cups from my arms, calling out for help from the experienced fisherman. I wouldn't be able to do it alone. But it would get done. I would take a passive role in killing Oscar, but he would be killed.

And so I hesitated. And the octopus fell from the hook. It was gone.

I went home with no octopus. There would be no takoyaki party.

I wondered if in some world, in some way, there was a situation in which I could realistically have a pet octopus. I'm pretty sure I read that Tracy Morgan had one.

But what would make my apartment different from any other form of captivity?

Who's to say that Oscar wouldn't choose a dignified death by his own hands, over being forced to spend his life with me? I decided not think about it further.

I searched for octopus videos on youtube, and got ready for bed. I would eat takoyaki again eventually. Just not tonight.